In our daily lives, we sometimes feel very confident in some advice. For example, each person needs to sleep 8 hours a day, can eat food on the floor if picked up in time, chewing gum will stick to the gut when swallowed … Today, let us decode the advice ” legend “from mothers:” Dear daughter, do not try to shave her legs will grow thicker and darker tomorrow “.

It is indeed difficult to find the starting point of the story. Many mothers recommend their children that way. And when asked why they know this secret, the answer is that it also comes from mothers. So from generation to generation, every mother believes that when shaving her legs, she will grow thicker and darker. To verify this, many scientists have done a lot of experiment. And they all realized that the growth of hair and hair wasn’t affected after shaving or any other kind of bleach.

“Women wax their legs very often. If the legs grow thicker each time, soon they will turn into gorillas, ”Amy McMichael, a dermatologist said . “Moreover, if we shave the hair to make it grow thicker, we will not have to worry about hair loss anymore.”

As early as 1928, there was a clinical trial showing that shaving didn’t affect their growth. The study, published in the British Medical Journal, says that “shaving off the hair, beard or dead hair does not affect the part of the body that lives below the surface of the skin.”

At this point, you may not believe and insist: “Oh, but I see my mother is right, they have regained black and thicker.” That is indeed the case, but before explaining this, I will tell a different story. 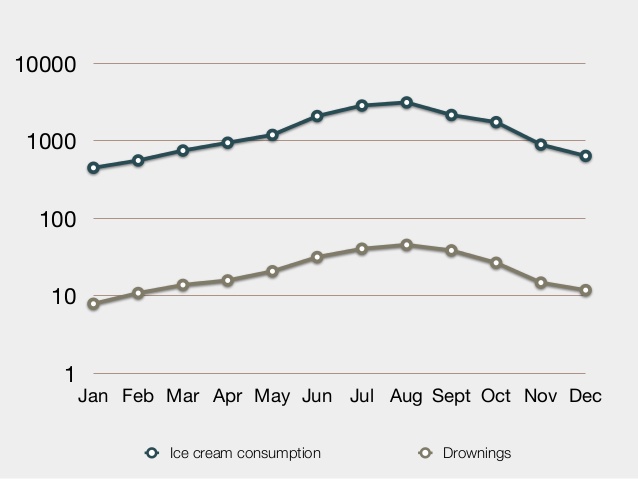 Will you find correlation here? Not at all, the problem is that everyone eats a lot of ice cream and goes swimming more when it’s hot. Accidentally temperature is a deciding factor that is not in the graph.

Going back to the story of clumps of legs, its thicker and darker growth comes from an element that is not present: the hormone.

Most girls start waxing at puberty. Similarly, the boys began to shave. And then mothers appear with the “legendary” advice. After many shaving and waxing, the children realized that they were indeed growing thicker and darker. However, the reason behind this phenomenon is hormonal fluctuations during puberty. When hormones increase, they affect the thickness of the hair and many other factors.

Then, before you can verify this, there are opposite statements. Waxing vendors say their products will cause obnoxious hairs to grow back thinner and slower. If you believe this, your feelings are once again fooled.

“Plucking and waxing with cream or wax products causes the hair follicles to be removed. This will take them a while to regenerate. They will grow out with a slenderer head. However, the thickness and color remain the same, ”Michael Vagg said , a doctor on The Conversation.

“However, there has been evidence that repeated waxing can permanently damage some hair follicles and prevent them from regrow. This only happened after a process lasting several years, ”Paul Willis, a science reporter explained in Catalyst Magazine.

“Like many other functions of the body, the appearance of hair, beard and hair reflects your overall health and genetic makeup. Unless you do something that affects the skin epidermis or interferes with hormones, this process is turned upside down. You can’t make them grow faster and thicker with a razor, ”said Michael Vagg.

In short, it can be claimed that shaving or waxing does not actually affect their development. Won’t hair clusters, hair, or beards grow thicker and darker after each shave? Maybe this only happens during puberty and its cause comes from hormones. If you are a mother, you should understand this when talking to your children. If you want to get rid of those disgusting hairs yourself, basically pick up the razor and there’s nothing to be afraid of anymore.